Is buying a property in Barcelona a good investment?

Buying a property is always a good investment, however, buying a property in Barcelona can turn out to be one of the best decisions for more than one reason. The city is a thriving metropolis that truly has it all. Barcelona is the IT city, the place that will never go out of style. But the big deal is that if you’re planning to buy an investment property in Spain, Barcelona could be a good place to put your money. Why? Gross rental yields are moderately good, ranging from 4.4% to 5.15%¹ in areas like Barcelona’s old town. Therefore at Urbane International, we advise you to buy an apartment in Barcelona if you want to have great returns.

Let’s face it, Barcelona is one of the most expensive places to buy property in Spain. But it could be well worth it, especially if you’re considering living there. Barcelona is a fantastic city in which to live and work and was recently voted one of the world’s top 10 cities to move to in a survey of over 20,000 expats.

Why live in Barcelona?

Built on 7 hills, the Catalan city of Barcelona is one of Spain’s crown jewels in terms of cities to visit. To put it simply, anyone can live in Barcelona since the city has a wide palette of offers fitting anyone’s taste: sunny beaches, vivacious nightlife, stunning architectural styles, history and heritage, nature and an unparallel quality of life. Elaborating on the reasons why Barcelona is, without doubt, a spectacular city to live in, one(we) needs to look towards the past to understand the present. One of Barcelona’s founding myths suggests that Hercules and Hermes lost one of their 9 ships in a storm on the waters of the Mediterranean and when they found it near Montjuic, the surrounding area took their breath away. For that reason, they decided to build a new city named Barca Nona which means the ninth ship. This myth suggests that Barcelona has over two thousand years of history and might predate Rome. Therefore, with so many years of life, Barcelona moulded itself into the perfect city, bearing the marks of heritage, culture and so much more.

Barcelona is an international city, possessing a thriving expat community which is not only international,
but also diverse.

The approximate number of nationalities that live in Barcelona is 179, providing a unique opportunity to get in touch with many cultures, meet new people around every corner and feel part of the community. Barcelona is in terms of safety the 11 th safest city in the world which is a significant ranking that includes not only personal safety but also health, infrastructure, environment and digital.

Whether you prefer the warmth of the sea or the fresh air of the mountains, the Catalonian capital provides you with both. Barcelona has around 160 kilometres of coastline and plenty of mountain peaks such as Monserrat and Montseny which are located nearby the city. Within the walls of Barcelona, you can find many lovely parks, of all sizes and shapes, some of which are charged with history. Whether you relax on the beach or climb all the way up to mountain tops, this will open your appetite for food, a department in which Barcelona excels again. Besides the traditional Spanish food which can be found anywhere in the city, Barcelona has its own authentic Catalan dishes such as fideua containing seafood and fish or esqueixada de bacallà which is created with cod, tomatoes, peppers, onions, olives and the famous Mediterranean olive oil. If you are not a fan of Catalan or Spanish cuisine, Barcelona shelters restaurants and locals with cuisine from all around the world from Chinese and Arabic to German and American.

In terms of art, Barcelona is a canvas filled with art museums such as Picasso, churches like Sagrada Familia and art-nouveau architecture give a Parisian vibe. Further, the city’s most famous architect, Gaudi has left many buildings and monuments to admire and visit from casa Batllo and Mila, as well as a park like no other, Park Guell.

If New York is, in America, the city that never sleeps, Europe has one of its own: Barcelona. Here each district has its own style of entertainment at night. Raval encompasses a more international and electric approach birthed by the variety of cultures sheltered here. Culture and an exotic touch coexist giving the narrow streets filled with different venues a unique charm. The neighbourhood of Born is leaning towards a more chic, friendly and vibrant atmosphere where anyone can enjoy an unforgettable night in a restaurant, a club or a bar. For bohemian-styled nights with a hint of intimacy and allure, Gracia is the right place to go as the district has plenty of cafes, bars, and restaurants as well as its own festival in August that provide all these elements. Poble Sec is the embodiment of rock and pop where large discotheques and bars lure residents and tourists in every weekend. In the Ciutat Vella area, anyone would become infatuated with the perfect combination of the sound of music coming from clubs, bars and restaurants and the image and smell of the sea. In the Zona Alta of Barcelona, a popular nightlife area is the Sant Gervasi where many students and adults get together to enjoy the ambience and relax in clubs and bars. Due to the tranquillity of the rest of the area, you can walk out of the club and a peaceful offer or head towards the city centre for more. So, if you buy a property in Barcelona, you have a wide palette of choices for a night out.

What is Barcelona’s Quality of life?

There are many factors that metamorphosed Barcelona into one of the best cities to live in. The mild climate and excellent quality of the food and drinks would be the first worth mentioning. The health system of the city is yet another strong point, followed by the high number of sports centres spread throughout the city. The capital of Catalonia is a great place for social cohesion as it is safe and strongly supports equality. The variety and number of natural spaces within the city and its vicinity to the sea and natural parks only add to the many reasons that make Barcelona a great living place. Another plus of the city is the high quality of the educational system.

Barcelona has a wide variety of universities, with a high number of distinct courses for both residents and international students. The duration of a normal university degree is 4 years while for master’s and for postgraduate courses it can take up to 2 years. What is more, is the level of the universities which are recognised worldwide. The university carrying the name of the city, for example, the University of Barcelona is a world-renowned institution, but other heavy names can be found here in the city.

All in all, Barcelona has 8 breathtaking neighbourhoods: Ciutat Vella, El Born, Eixample left, Eixample right, the Gothic quarter, Gracia, Poble Sec and Zona Alta, but also various reasons to become the perfect home for anyone. 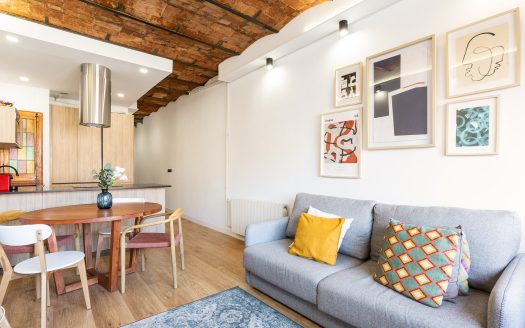 Nov 11, 2022
Why buy a property in the neighborhood of Ciutat Vella The old town, known as Ciutat Vella, is the historic nucleus ...
Continue reading
Sign up to receieve alerts for new properties and save your search!
Sign into your account
or
Login with Facebook
Login with Google
Create an account
Reset Password
Register here! Forgot password?Back to login Back to login