Beautiful apartment of 113m2 for sale in Eixample Derecha

This beautiful and peaceful apartment has a total lot size of 113m2 and one spacious bedroom. Two bathrooms were only recently renovated. The apartment features six symmetrical windows opening onto the tree-lined and pedestrianized Carrer de Girona. It also has a long terrace with sunlight for a couple of hours per day. The open-plan architecture is illuminated by ample natural light. The apartment is located on the 2nd floor.

The whole building has been comprehensively redesigned for contemporary living. Two new glass-walled light wells run vertically through the building. They bring the brightness of Barcelona’s Mediterranean climate inside at every level. They also open up an unbroken panorama of the city from the fourth floor and upwards. The building’s original light well has also been retained and enlarged in the new designs, further increasing the level of natural illumination. Inside, pillars replace load-bearing walls with expanding open-plan living spaces. Six large, symmetrical street-facing windows illuminate properties on the Carrer Girona side of the building. On the other side of the building, large windows look out over the former mill and the peaceful interior of the city block.

This project is perfectly positioned for city living. Its quiet street, soon to be pedestrianized, is located just minutes from Barcelona’s beaches. The hip Born area is on the doorstep, alive with bars, restaurants, galleries, and museums.

Eixample Derecha is the place to be! The heart of the Eixample, Passeig de Gràcia, is just a short walk away. This broad boulevard is lined with Barcelona’s top luxury hotels, designer boutiques and restaurants. It is also the epicentre of Modernist architecture, the location of some of Gaudí’s most iconic buildings. All around Girona34 are new renovations of historical buildings, new pedestrian areas, new businesses and new life. Eixample is a large district north of Plaça Catalunya on the left and Passeig de Gràcia on the right. It is translated from Catalan as “extension” because it is the city’s newest part. In the 1850s, Cerdá, a great Catalan engineer, was in charge of the city’s expansion. Because Cerdá despised straight lines, the entire area is built out in a grid, with each building block having its patio. As a result, it’s challenging to get lost in the Eixample. As a result, finding locations is a breeze.

Most of Barcelona’s art nouveau gems are currently housed in the Eixample. It’s a nice residential area with various shops and some of the city’s best restaurants. It’s a fantastic area to live, always bustling with activity.

Your energy class is B 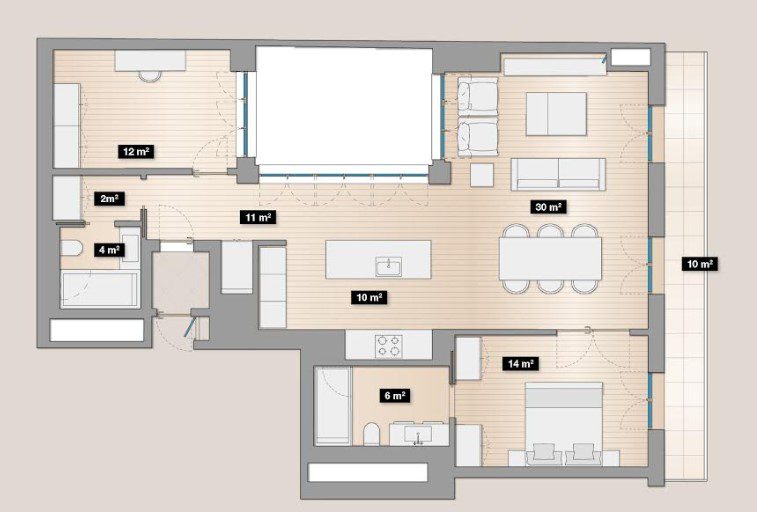